Creating Sleep Rituals and Busting Through the Bedtime Blues Remember when sleep came naturally, and you were able to snooze for hours on end? Somedays, life before twins may feel like a movie that you watched a long time ago. Whether you are in the twin pregnancy stage, infancy, or the toddler times; I promise you that sleep does come back. 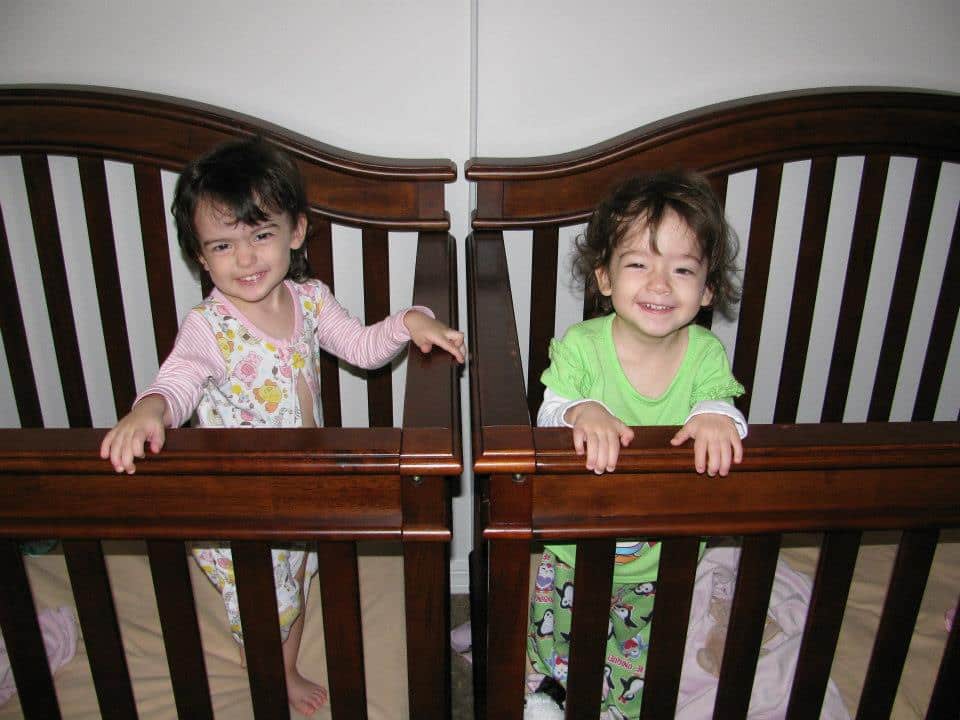 Around my second trimester, one pregnancy pillow was not enough. In our queen size bed, I had two pillows surrounding me. My poor husband had about one-third of the bed, while I sprawled out on the other portion.

I was unable to sleep on my back because I snored so loud that I woke the cats. Or, so I was told. I tried to sleep on my right side, but our one daughter did not like me laying that way. She was not afraid to tell me with hard, repetitive, kicks near the rib cage. The only side that was okay for the two of them, was my left side. Unfortunately, the left side was uncomfortable for me. Eventually, I came to a compromise and was able to prop myself up, while being turned towards the left.

Overall, the pregnancy pillows were a lifesaver. I was able to have relief and stay content, for quite some time. After delivering the girls, the pillows were still my go-to for comfort. That was until my husband fell asleep with one, and I had to share from that point on.

We had the baby monitors, baby-proofed just about everything but our cats, and had a good estimate of what the schedules would be like. After the girls were born, all of those were important factors in our sleep routines. If we stayed consistent, we felt that it would pay-off.

The baby monitors offered peace of mind, reassuring us that our girls were okay. The baby proofing played an important role when our girls started to crawl and walk. The schedule gave us the biggest reward. Both girls woke up, ate their meals, napped, bathed, and went to sleep at the same time.

Another helpful item was the sound sleeper. Seven years later, and the girls still use it. Keeping it low, but offering a white noise, allowed us to finish things around the house without disturbing their sleep.

Forget late night feedings, as the toddler years provided plenty of late night and early morning workouts. As soon as they found out that they were mobile; our girls would climb, open, and bang on everything that they could. Child safety gates, along with the previously mentioned baby proofing, provided us with some sanity while keeping the girls safe.

When putting the girls to bed, we stuck to the schedule and the nighttime routines. Bath time was first, then we would read a book, tuck the girls in, and close the door. If they woke up during the night, the gate protected them from running amuck around the house. It, also, gave us plenty of time to react by getting them back into bed. We would immediately walk out of their room and say, “goodnight”.

My husband and I remained consistent. The girls quickly learned that they could throw a fit, scream, or stare at the baby camera for the monitor; but those behaviors would not bring us back in to accommodate their desires. If one would do this, the other typically woke up to see what the fuss was about. The other would either join in on the nonsense, or they both would chatter for a few. Regardless, it would exhaust them both, and they would fall asleep soon after.

I can reassure you that you can tell the difference between cries. If someone wanted their own way, versus a cry for help or if they were not feeling good. In these instances, we would, of course, respond to and make sure they were okay.

Keep in mind that whatever bedtime rituals that you create, make sure they are ones that you will want to stick with. If you enjoy rocking your babies to sleep, while snuggling with them in the chair; be sure that you will want to do that every night over quite a few years. If you begin a habit, then that one time you do not do it, everyone has a good chance that they will be in for a rough night.

Try your best to sure that everyone is getting plenty of rest. You and your support team need the energy to keep up with the twins. While the twins need rest to help with their growth. Sticking to a routine, that works for you and your family, is the most important thing to do. It is a crucial part of your self-care.