23 Reasons Having Twins is Incredible

Until you’ve lived with twins, you don’t know the sheer amount of glorious joy that comes with waking up in the morning (or the middle of the night) to see both smiling faces staring up at you.

Here’s our list of the greatest reasons that having twins is effing awesome!

#1 Go through pregnancy once, but get two children!

A lot (a lot) of women struggle with pregnancy, and having to go through the whole ordeal once and getting two beautiful, bouncing babies out of the deal is a super bargain!

I mean, having twins is more difficult than just having one kid, but it’s not that much harder, and it’s so much more worth it.

#2 That your twins are best friends for ever

It’s almost a cliché now, but most of the time twins really are best friends. They legit have that special connection, which apparently starts when they’re in the womb together, and only gets stronger as they grow up and share everything.

So there’s one big worry every parent has that you can get off you chest. Your twins will always have a best friend, and a closer one than anyone else will ever have.

#3 It takes a lot of the pressure off, even though it’s actually harder

Babies need loads of love and attention, but when you’ve got twins, they’re going to spend a lot of time with each other rather than needing you there with them.

This is both awesome, because it frees you up to look after them properly and get everything done, and it’s a little bit sad, because some of the laser love you’d normally get from your baby is going to be focused on the other twin.

Anyone who sees your twins is instantly gonna fall in love, even if you’re just out with them both in the double stroller.

When every person you see starts cooing over your little treasures, it only makes you feel all the more special, and makes the struggle of pregnancy all the more worth it.

#5 Realising just how much you love your partner

I don’t know if you know this, but, raising a baby is difficult. And raising two? Well, it’s fair to say I’d rather not do it alone.

So when someone starts crying in the middle of the night, waking up their twin, and your partner rolls over and says ‘Don’t worry, I’ve got this one.’ You’ll find yourself falling in love with them all over again.

I know. Social media isn’t everything, but sharing a picture of your twinnies and having everyone you know comment? Feels amazing.

And hey, justify it by saying they’ll love these photos when they’re older. Because they will. I mean, who wouldn’t?

Every mom has a story about how their child said their first word or when they first started walking. You get to have two of them!

#8 It gets you out of everything!

Kitchen’s a bomb site and you’re just sitting on your ass eating take out. Again?

Family event coming up, but you really can’t face your obnoxious second cousin.

Still can’t fit into those jeans, and considering throwing them out, even though they’re a year old now? 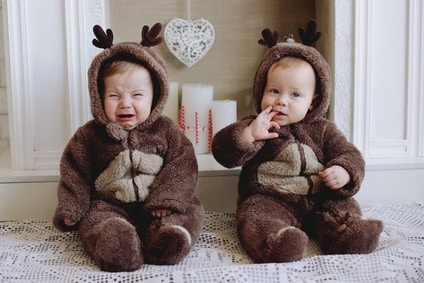 Whether it’s Halloween, parties, or just for the hell of it, the opportunities are endless!

#10 You get to be an awesome parent, twice over

It’s incredibly fulfilling to know that you’re doing the best you can for your kids, and it’s actually working.

And when you’ve got twins, you know it’s you. When they’re both killing it at school, getting gold stars and A’s all over the place, and you know it’s because you spent that extra Saturday sitting with them both studying. Feels amazing.

You’ve all seen it. A brand new mom with that deer in the headlights, just got back from ‘Nam look, like she’s seen the true darkness that lurks in the hearts of men, and it’s six months old and just started crawling. ..

Well, as the mom of twins, you’re going to face legitimately everything a new mother could face. Twice over. But you’re strong. You’ll beat this. And you’ll come out the other side stronger. You hope…

Until you’ve lived it, having twins is an experience like no other. Watching them play with each other, especially if they start making up their own special twin language is so adorable, it’s almost untrue. I feel like I’m watching a Disney movie!

#13 The fun of choosing two names

Every parent agonizes over their child’s names, wanting to pick the perfect one that suits them completely, and that everyone’s going to think is just soo cute.

You’re lucky enough to do that twice, and you might even choose to give your twins a theme name.

#14 Knowing that no matter what, your twins have got each other

Twins share a special bond. Everyone knows it. So when they’re going into school for the first time, or going on a plane when they’re young, or even just having tough times with friends, they’re going to be able to relax because they’re with each other.

If you’ve got two children and you ask them to dress up the same, they’re going to look at you like you’re insane.

But twins? Twins will do it without a second thought. I suppose being alike really does come naturally to them?

We meet on Thursdays, bring muffins.

But seriously. Even though twins are getting more common, they’re still rare enough that having twins is a really unique and surprising thing. You’re still gonna feel special, especially if you’re the only mom in your group of friends with twins!

#17 Only having to plan one birthday for two children

At least when they’re younger, twins are going to love having a double birthday. And not only is that easier for you, and so much simpler when it comes to invites, cakes and all that sort of stuff.

It’s awesome because you get some of the most adorable photos in the whole world (see #6).

#18 Watching them learn together

We all get that rush of concerned pride when we see our children trying and struggling to grasp something new, and then when they conquer it, the euphoria is like nothing else.

Well, when you’ve got twins, watching them work together and learn to smash life’s problems as a pair is the greatest feeling!

#19 So much free entertainment.

There’s a reason babies are a staple of comedy clip shows. Because they’re just natural comedians, and we love em for it.

So when you’re living with a double act, you’re going to face double the trouble. Watching their faces when you ask them why there’s crayon on the wall

That feeling, when you and your child are both pooped out, and they just want to hug you and fall asleep, is the best.

Well, as the proud mom of twins, you might get double the trouble, but you can also expect double the love a mom normally gets, too.

#21 It really helps with decorating 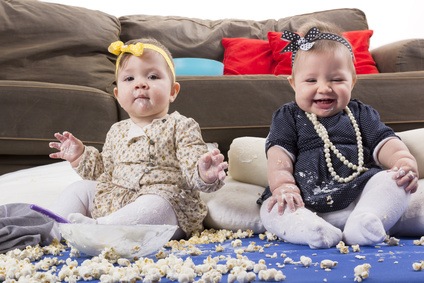 I mean, who didn’t want every photo in the house replaced with proud stick figure pictures?

Or maybe you were wondering what your living room would look like covered in baby food, but were too afraid to try it out.

Maybe you’re even brave enough to try the daringly unique ‘coloring in the walls with lipstick’ decorative technique. Sure to make family and friends instantly jealous.

Well with twins, these things and more are twice as likely! Count yourself lucky?!

When you’ve got twins, you’re going to be running around just trying to cope. You won’t have time to worry about the silly things like spending hours getting your hair done any more, but that doesn’t matter.

Because your life is now complete. You’ve got everything you need, right there in both arms. Who cares that you look like a scarecrow. Right? Right???

Seriously. Until you’ve seen it, you won’t know. It really is just a twin thing.

We hope you’ve enjoyed our list. Although I think it’s pretty comprehensive, there’s sure to be something we’ve missed, so make sure you fill us in on what else is awesome about having twins in the comments!