You’re nine weeks pregnant with twins. Nine weeks in, and probably starting to put on a little bit of weight.

That’s completely normal, and something that happens when you’re 9 weeks pregnant with twins. Expect to be putting on around 5 or 6 pounds by the time you’ve finished the first trimester.

Still, there’s a lot more to pay attention to than just your weight. Your babies are developing enough that they’re moving from the embryo to the fetus stage. Read on to find out what that means.

A single fetus at 9 weeks

Your Twin Babies at 9 Weeks Pregnant

Your babies are right at the end of the embryo stage. Right now, they’re recognisably little people, about the size of an olive or grape, and they’re getting to be far more fully developed.

Ears and toes are growing and getting defined, eyes are fully formed, with shut eyelids over the top of them, with a little mouth and nose as well.

All of the internal organs are in place and developing well, and their little heart is fully formed, with all four chambers. Tiny little teeth are also starting to form in their mouth, ready to come out later, with all the fun of teething!

Right now, they’re almost an inch long, and almost twice as heavy, at 0.07 ounces. Expect that to climb rapidly, now that they’re mostly developed and the placenta is pretty much complete.

At 9 weeks in, the pregnancy hormones are at their highest levels. That means that this week is going to be punctuated with the highest levels of your pregnancy symptoms.

That means that this week might be the worst one yet. But on the upside, from next week, everything should start to slowly get better as your hormone levels normalise and everything gets a lot more stable.

If you’re getting an ultrasound at the ninth week, you’re going to be able to hear your twin’s heartbeats. Incredibly, they’re going to be beating twice as fast as yours, or around 130 beats per minute. 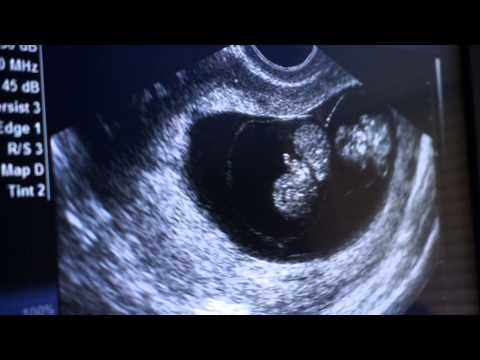 [thrive_text_block color=”blue” headline=”‘Must Haves’ in Trimester 1 “]We asked the TwinStuff Community what their Must Have products were during the first Trimester:

Are You 9 Weeks Pregnant with Twins?

The next few weeks will bring major changes, so it’s good to take the time to reflect on how far you’ve already come, and the miracle that’s going on with your life and inside of you right now.

We’re glad you’re here with us. If you want a chat, or just to connect with other women in your position, feel free to drop us a comment. How do you feel at 9 weeks pregnant with twins?

Everything You Need to Know about Multiple Gestation Pregnancies

Can a Hidden Twin Be Detected During a Twin Ultrasound?

When Do You Find Out the Gender of Twins?