Can a Twin Have Twins?

Who carries the twin gene? Further, can a twin have twins? For some couples who want to have twins, questions like these would surface every now and then.

They can even go as far as finding ways to increase their chances and do everything they can to sway these odds to their favour. Before doing anything, though, it pays to do some research. 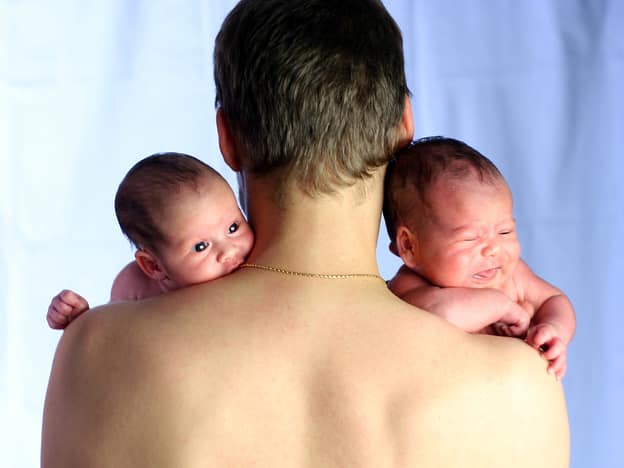 Can a twin have twins?

Basically, if you or your partner have a history of twinning in the family, then there is a higher chance of conceiving twins. Specifically, this is true for women who have fraternal twins in her line of the family.

More specifically, a woman who is a fraternal twin herself has a 1 in 60 chance of conceiving her own twins. Men, on the other hand, who are fraternal twins will have a 1 in 125 chance of being a father to twins.

Generational Twinning: Is this possible?

It is assumed that having twins in the family is genetic and that it runs in the family. But others go beyond that and believe that twins skip a generation. Although this is considered a myth, there may be some truth to this skip-a-generation theory.

To understand this further, we have to understand hyperovulation. Hyperovulation causes a woman to release more than one egg in a cycle. If two or more eggs are fertilized, fraternal twins occur.

The gene that causes hyperovulation is said to be hereditary, so only the mother’s genetics influences the chances of having twins in the family.

Children who receive genes from their parents may inherit the twin gene that causes hyperovulation. If twins run in the mother’s side, her children may inherit it and can conceive twins in their generation.

If, for example, the father is a silent carrier of the twin gene, he could pass it on to his daughter who may conceive twins herself through the inherited twin gene that causes hyperovulation.

The daughter of a couple who the dad or mom is the carrier of the twin genes may have twins. The son of the couple would not because men don’t ovulate. But then this does not discount the fact that the son may have inherited the twin gene.

If he has a daughter of his own, he can pass this gene on to his daughter, and it is possible for him to have twins as grandchildren. In this case, the skip-a-generation theory is correct.

What can increase my chances of having twins?

There are factors that increase the odds of having twins. Here are a number of them.

Prenatal care in moms carrying multiples is to be given the highest attention and priority. Since they have a higher risk of developing complications, you would need to see your doctor more often.

During the first trimester, usually, the healthcare provider would need to see you every two to three weeks. When you enter the second trimester, you would need two visits in a month. And in the third trimester, you’ll have to visit weekly. These frequent visits are done to monitor your health, as well as your babies.

This allows prevention and early detection of any complications that arise. Some of these complications that health providers watch out for include preterm labor, preeclampsia or pregnancy-induced hypertension (PIH), Intrauterine Growth Restriction (IUGR), gestational diabetes, fetal demise or loss, and fetal well-being.

Preterm labor happens when twins are born before they are 32 weeks old. Preeclampsia is a complication related to high blood pressure with some evidence of damage to other organ systems, which is usually the liver and kidneys. Preeclampsia begins after 20 weeks of pregnancy.

IUGR is a condition when a baby is born smaller than the average newborn, perhaps because it did not grow normally while it was in the womb. Gestational diabetes, on the other hand, causes high blood sugar and can significantly affect a mother’s pregnancy, as well as the babies’ health.

Fetal demise is a medical term for stillbirth which pertains to the baby dying in the uterus. This may happen during or after the 20th week of pregnancy. Of course, monitoring the fetal well being of twins involve many tests.

These tests include the Non-Stress Test (NST) where fetal heart rate is measured; the Bio-Physical Profile (BPP), which uses ultrasound to evaluate the baby’s movements; Amniotic Fluid Index (AF), which is particular with the amount of amniotic fluid present; and kick counts.

So, beyond asking “Can a twin have twins?”, what is essential is understanding the whole process of how twins are conceived and how they run in the family. The even more important thing is getting the best prenatal care which is absolutely a priority for a stress-free and happy pregnancy.