What are Old Wives Tales about Twins? Are they True?

Before the era of ultrasounds, it was a time of hunches, gut-feels, and pretty much relying much on feelings when a woman is pregnant. In context, there are old wives tales about twins that may or may not necessarily be accurate when compared to science.

Knowing about such thousand-year-old myths is actually quite amusing and interesting, but when you talk about finding out if there’s truth in them, well, that becomes fascinating!

There are theories about conceiving twins that may actually be scientifically proven. These beliefs have something to do with yams, quitting the pill, twins running in families, and a lot more.

1. There’s something about yams and conceiving twins. It is believed that yams have a fertility-inducing property, releasing hormones that promote ovulation. An ethnic group known as the Yoruba in some parts of Nigeria, Benin, Togo, and Ghana have been known to have the highest twin birth rate worldwide.

This is said to be caused by their intake of yams. So, old-timers say that if you want to have twins, eat more yams. This type of yam is almost white or light yellow.

2. It is a common belief that once a woman goes cold turkey on the oral contraceptives, it is more than possible to have twins. This twin effect is caused by the superovulation of the woman’s ovaries right after she stops taking the pill. A lot of moms say that this is true to what they experienced.

3. Another thing we usually hear is that twinning runs in the families. If anyone in the family, either on the mother’s or father’s side, has had twins, then it is only a matter of time that twins will be born somewhere along the generational timeline. Added to this theory is saying that twins skip a generation.

4. Something passed on to generations is that drinking bourbon before pregnancy will increase the chances of conceiving twins. Bourbon is on the list of food and beverages with high levels of phytoestrogen, which increases fertility.

6. Another interesting and somewhat amusing tale is feeding oysters to your partner may lead to twins. Why? It is because that oysters have a high level of zinc which helps with the production of sperm. If they swim faster, then they will be more able to fertilize not just one, but two or more eggs. Zinc-rich foods include green leafy vegetables, seeds, wheat germ, cereals, and bread.

7. Another commonly held myth is that women who breastfeed are more likely to conceive twins if they do get pregnant while breastfeeding. This is said to be possible because of the rich amount of prolactin. Even if breastfeeding can actually put the menstrual cycle to a stop for some time, well, life can be really surprising!

8. Living or procreating in a warmer climate increases a mother’s chance of having twins. Although there is no hard evidence to prove this yet, a hotter climate has something to do with heightened FSH levels or Follicle-Stimulating hormones.

With all the myths about twins, we can get confused as to which ones are actually true. Here are some of those tales that have been studied but remain fun facts to know.

1. Identical twins can communicate by ESP (Extrasensory Perception)
A lot of people think that identical twins can read each other’s minds. No scientific evidence proves this. What would adequately explain the twins’ closeness is that they have common genes that make their communication skills very similar. 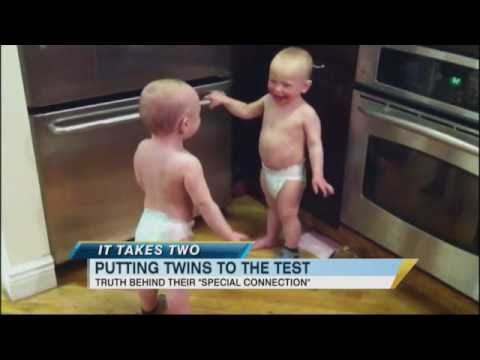 Now, just because identical twins are in fact “identical,” this does not mean that they have similar fingerprints. They surely do not have the same prints. Fingerprints develop somewhere between the 10th and 25th gestational week and are affected by different factors like temperature, amniotic fluid density, and intrauterine position.

4. Mothers are told not to breastfeed twins.
Family members would sometimes tell mothers not to breastfeed their twins because they say it is impossible to do so. They believe that the body won’t have enough milk to keep the twins healthy. This is, of course, not true at all. A mother’s body can give her babies what they need, especially when it comes to milk supply.

As twins, they are separate individual human beings with specific character traits and personalities. But it does not mean that one is always good, and the other is always bad. This belief may have been inspired by the tales of mythology throughout the world.

For sure, there are a lot more old wives tales about twins out there and believing in them is a personal choice. But, it is always good to do some research to balance things out.