Overcoming Obstacles When Having Twins

As soon as anyone catches wind that you are expecting, let alone twins, you will receive an earful. You quickly learn just how strong you are, when the Mama Bear side of you conquered through the hurdles. Here are a few obstacles that I overcame, as a mom of twins. 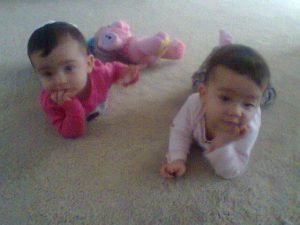 Everyone knew that my husband and I were trying to have a baby for quite some time. Twins were an added bonus, after the struggles that we had been through. Yet, when we announced that we were pregnant with twins, there was quite the reaction. Overall, the majority of comments were positive. While others were not as much.

When you first announce that you are expecting twins, prepare for some negativity to come your way. Quite possible from those who are trying to get pregnant or wanting to adopt. If you experience someone who is not overly excited about your great news, it has very little to do with you. Those that send out negative vibes are going through a rough time of their own. The best thing to do is to give yourself some space from that person, and do not take it personally.

I went through it from a friend of mine. She was upset when I told her the news. She and her husband had been trying and were unsuccessful. Later, she and I talked things out and she explained that her negativity had nothing to do with me. It was a reflection of the difficult time that she was experiencing. Handle yourself well and redirect that energy towards caring for yourself and your twins.

On the flip side, there are those that are overwhelmingly excited for you and start acting like they are the ones carrying your babies. They tell you what to wear, what to eat when to sleep, and other ways of handling your pregnancy. They have your best intentions in mind, and most of the time do not realize how they are acting.

Most of the time, they too may be going through something. They respond in an overbearing way and just need to be spoken with. Have a sit-down conversation with them, letting them know how much you value their enthusiasm, but that they need to let you live your life the best that you can for the twins and yourself. If they have a difficult time understanding this, give them more space and time.

I never knew how much of hormones I would lose during and after delivery. Your hormones are excreted through the twins in the form of an odd-color goop that ends up in their diapers. As new parents, my husband and I thought that something was wrong with the girls. We had no idea what it was until a nurse informed us.

I was briefed about hormone changes and the possibility of Post-Partum Depression (PPD). I knew that I may not feel like my former self for a while. I was caught off guard by how much I no longer felt the same. Hormone levels, in mothers of twins, drops twice and fast than a mother of a singleton. Take charge of your mental and physical well-being. If something does not feel right, speak up to your doctor and talk to those closest to you.

If one or both of your twins do need physical therapy (PT), try not to stress. Our Shelby, “baby b”, had torticollis and hip dysplasia. At six months of age, she was in physical therapy three times a week. By eight months, we only had to go in twice a week. By ten months, she was down to only once a week. At one year, she was keeping up with her sister and has had no issues since.

Hurdles like these can be exhausting. Having to squeeze in more appointments is taxing. I really had to focus on taking one thing at a time. This forced me into being more flexible with my baseline schedule.

Diapers and Other Dirties

Having twins allows you to quickly get over feeling squeamish about gross things. After experiencing the first time of holding one of your twins, then feeling the rumble coming from their bottoms, you swiftly become a diapering master. Moving fast to catch any spit-ups or cleaning up after the twins discover non-washable markers.

Twins instill an extra insight into potential challenges that a mom of twins must handle. Needing to look at every possible outcome and have back-ups just in case. All the while remaining calm and flexible. Twins bring out an extra-superhuman power that has been there. As twin moms realize, these self-improvements manifest every day as your twins grow. As they grow, you will too as an amazing mom.

Jennifer writes for a children's reading app project run by Upwork's Managed Services program, along with writing articles for TwinStuff.com. In 2005, Jennifer met her husband on board a cruise ship. In 2011, after failed pregnancy attempts, they welcomed their twin daughters. The girls have been attending a virtual homeschooling program, to which Jennifer is their learning coach. Jennifer is open about her twin pregnancy, losing her mom to cancer, and other hurdles she and her family have overcome. Follow her on her social media platforms.